A couple of Fridays ago, I posted an interview with Heather Howland, one of the editors at Entangled Publishing.  She told us all about her small press and it's big plans.  (See interview here.)  But for those of you who are for some reason leery of the small presses, I thought you'd like to hear about self-publishing from a pair who has just journeyed that route.  Meet Renee and Harrell (Hal) Turner.  This husband & wife team writes under the super-secret (yeah, not-so-much) pen name: Renee Harrell.  (And they are no relation to me, I might add.)  If you've ever been curious what it's like to self-publish, read on. You may or may not be surprised.  (And let me just say, I am surprised to hear stories like this!  I apologize in advance that this is a bit longer than usual, but it's all interesting IMHO.)

(They use these oils in place of pictures - I'm already amused.)

Tell us a bit about your publishing history.
Can we share a little about our writing history, instead? For years, we did very little writing for the commercial market. Then, Harrell discovered a book packager looking for writers for the company’s ongoing YA mystery series and asked Renée if she’d like to work with him on a novel. We wrote an outline, sent it in, and received our first book contract. A few months later, we collected our fee, the book was published, and we learned that work-for-hire writers are frequently rewritten by their editors. The storyline remained intact but there was a plot twist in the novel that just didn’t make any sense....
[Interjection here -- I naively would think that once you've been picked up to write a story by a book packager, you're basically "in." Not so, apparently.]
Since we’d already written one YA mystery novel, we decided to write another but, this time, we wanted to create our own characters. Our heroine wouldn’t be super smart (because we can’t relate to people who are super smart), she’d have some body issues (because we can relate to body issues), she’d only have a couple of close friends and she’d have a close and loving relationship with her one surviving parent. Ann Lippens wouldn’t be edgy or dark, she’ be a more like normal person: Not anti-Miss Popularity but not really Miss Unpopular, either. In other words, a lot like we were in high school.
As the book grew, we added some paranormal elements, some horror elements, a twist of Jack the Ripper (although, really, we think most of our audience will miss it) and a touch of romance to the book, because we like those things. When we finished the novel, we contacted a handful of agents. Happily, we timed the market well and three of the five agents quickly asked to see the full manuscript. By the end of a week, we were signed with a solid and respected agency. Four months later, the book was submitted to all of the big publishing houses and we signed a huge contract and now we’re famous.
It would have been exactly like that except that all of the big houses passed on the opportunity to give us a basket of money. (The folks at Penguin said nice things about our work but they didn’t offer a contract. We still feel kindly toward the people at Penguin.) A few weeks later, our agent disappeared – or, at least, we think that must be what happened, since she no longer answered our emails and never called us again. Several months after that, we formally ended our relationship with her. We’ve since met two other writers who had a nearly identical experience with this agent.
Meanwhile, our YA novel, whis•pers, was back in our hands. We spoke with an agent who told us the manuscript was “cooked” and we should “forget about it” but we liked our story. So we looked around for an electronic publisher of Young Adult novels. There’s more interest these days but, in 2009, not so much. We found someone we liked, signed a contract...and things went badly.
A year later, we asked for our rights back, they were given to us, and we changed the name of the book to Something Wicked. We decided, then, to publish the novel ourselves. 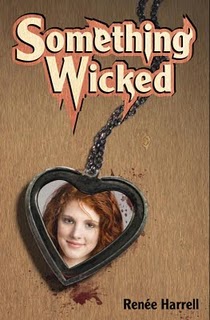 Harrell: I’d grab Huckleberry Finn by Mark Twain. Because the book is one of my favorites, and it’s fairly long (might need the paper!), and it’s written by a guy with a pseudonym.

To learn more about Renee and Hal, visit their website (which is quite humorous) and you can read my review of Something Wicked here.  And there you have it folks.  The low down on why one couple decided to self-publish and the unfortunate events in the publishing world that led up to their decision.  Did you learn anything new or surprising? What are your thoughts on self-publishing?
Posted by Jessie Harrell at Wednesday, April 27, 2011