Some of us had Welcome Back Cotter or Good Times, while others of us had 90210 (the original), Saved By The Bell, and the Breakfast club. Today there's Gossip Girls, Degrassi, and Pretty Little Liars. As I was thinking of a post to write for Thankful Thursday, a commercial of That 70's Show happened to come on the TV. Hah. What better show or script encompasses the plight of the teenage years? 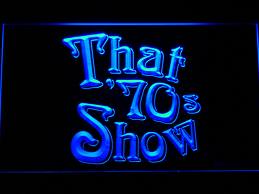 Issues of dating, teen employment laziness, school work, and life-after-graduation (not to mention a few of those awkward teen unmentionables) are covered. Yeah, and the whole way-uncool-parents thang. *shiver*

So I thought it'd be fun to explore what aspects of the teenage years we, as YA writers, should be thankful for.

Fashion: What more could we want as writers to dress up a scene than a group of characters in totally contrasting colors and styles? Talk about your arena for conflict. Prom scenes, a night party on the beach, or the notorious school uniforms (& the choice of attire while out of those uniforms) can add interest and intrigue to a scene, chapter, or novel as a whole.
Teen slang: Let’s assume a writer has studied the lingo of a diverse group of teens. Used properly, this element can take an average manuscript to new heights. It can explore ethnic and financial backgrounds, and even character insecurities. The youthful spirit can literally breathe off the pages.
Those AWKWARD moments: Um, yeah. This is when it's good to already be out of the teenage years. Although major Hotheads to those successful teen authors out there, I can't imagine writing about those years while living through them. Phew... But as difficult as some of those moments may be, as writers they are our pot of gold. The awkward kissing scene or the dark argument between a teen and a parent. Then there are the embarrassing moments where the girl discovers in front of the entire student body that her boyfriend cheated on her with her best friend. And what about when the mean kids set up the poor girl and spill pig's blood all over her? (Poor Carrie...)
Friendships: So much information about a character can be exposed through the teenage friendships we create. These relationships can be used for both inner and outer growth. Sometimes they can make us laugh, while other times they make us cry and even explore our own pasts. I believe this is one of the most powerful aspects of writing YA and what makes it unique.
So today, let’s just be thankful for the diversity during those teenage years and what it gives us as writers. Can you add to our list?
Posted by S.A. Larsenッ at Thursday, September 23, 2010