Writer's Wednesday: Can you Plot Without Voice? 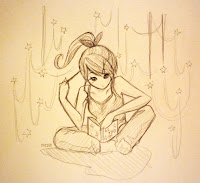 **Art from Deviant Art **
At my last SCBWI conference, I heard one of the presenters say: The question isn't what should HAPPEN next, but what would your main character DO next.  Which seems to tie in with a predominant theme Nikki said she kept hearing at her SCBWI conference last weekend - an author must have a solid voice.  If it's possible to combine these two pieces of advice, it means that if we're thinking about what our characters would "do" next, we have to already know their voice. (I mean, Bella wouldn't be Bella if she willingly wore a prom dress and had anything nice to say about it, right? )
**Art found here.** 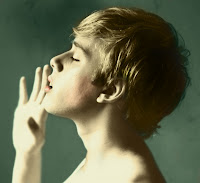 Which has me thinking... can we effectively plot a novel if we haven't already nailed our MC's voice?  It seems that for most of us, this kernel of an idea sprouts inside our brains and we grow it around the  storyline.  The MC often takes shape by the actions we're forcing him or her into as part of the story arc.  And I wonder - is this backwards?

Do the "pantsers" have the edge in today's market because they develop their MC's voice and follow where it leads?  Or is voice just a packaging for character traits and can be added in or tweaked later?

I wish I knew the answers to these questions.  I can say that writing Destined was relatively "easy" and freeing because the plot was already in place -- I simply drew on the ancient myth and let Sadie's new & improved (IMHO) voice tweak the old story. For example, in the original Cupid & Psyche myth, Psyche waits around for others to help her solve her problems.  In my version, Sadie is proactive and clever.  The end result is the same: Psyche/Sadie completes Venus' seemingly impossible tasks. But her voice changed. Her character changed. All while the basic story structure remained in place.

Which tells me that as an author, I need a basic plot (points A, B, C and D) in place, but when determining how to navigate within those points, that's when I need to let the voice of my character be my guide.  What about you?  Do you heed the siren song of your MC's voice or do you create an elaborate plot and your MC falls in line accordingly?
Posted by Jessie Harrell at Wednesday, February 16, 2011